Our week started off early as we headed out in search of some lions. After tracking down some of our bigger thick skin animals and spending quite a lot of time with them, we moved on. We heard about a pride of lions that was found but decided to rather head through to them a little later in the drive. We watched as the Styx Pride slept and you could almost see the satisfaction on their faces as the morning sunlight helped them heat up from the ice-cold morning conditions we experienced.

After what we believe to have been a big altercation between the Kambula Pride and Styx Pride, we only saw the Styx Pride again at the end of the week, lying in the shade of a Tamboti thicket, not too far from Bush Lodge. As the sun set, they started to get active and one by one they came out of the thicket. They didn’t make it too far, as they lay down on the road again, and some of them climbed on top of a termite mound, catching that last bit of sun rays.

Lions are very social animals, and they mostly rest or sleep very close to each other. Through observation, it seems a norm for the lions to groom each other, especially after long periods of sleeping or resting. We usually look for yawning and grooming to assess if the lions are ready to get moving, and mostly, this is the case. Grooming each other is a way of strengthening their social structure in a way that even when they are faced with danger, they trust each one can protect the other. Only 2 adult females and 8 cubs have been seen since, and hopefully, the other members will re-join their pride soon.

While we were in the northwestern sector of the reserve, we heard a call of a female cheetah and cub not too far from us. Knowing it was the last drive for 2 of our guests before they departed, and wanting to see a cheetah, we made our way there.

We sat with the female and cub, watching as they would get up and move every now and then. Cheetah, being the weakest of the big cats, always need to be on high alert.

We opened the lodge in the early morning hours to get ready for morning coffee and tea and while doing wake-up calls only a few moments later, we heard the baboons and monkeys starting to alarm call and go crazy in the trees out front of Selati Camp. When we looked out to the waterhole, we were surprised to see the beautiful male leopard, N’weti, walk out of the drainage line to come and have a drink at the waterhole. Once we were out on safari, it took some time to find him, but we were successful.

We watched in awe as this big male made his way through the grass up onto a termite mound. He proceeded to walk right in front of the vehicle and let out a couple of sawing calls that made the vehicle shake and our jaws drop.

Heading out on safari, our guests asked to see leopards, so we drove around looking for any fresh tracks or signs of any in the area. While watching a Lilac-breasted Roller in the trees, we heard over the radio that a female leopard had been sighted. We made our way into the sighting where Ntsumi was resting in a small open area.

Ntsumi has two small cubs that are still dependent on her for milk and food. Every time we find her, we are always looking around to see if she has the cubs nearby. In most cases, she would be hunting, as she was in this sighting, and it is always very important to give her a lot of space so that if she decides to hunt, she does so without any disturbances, as she needs to provide for the cubs. We have not seen her with the cubs of late, but we always find a lot of her tracks and the cubs, a sign that they are all doing well.

Tracking a female leopard in the morning safari we finally had a brief vision of her on our way back to the lodge. We also found a fresh impala kill covered in grass. Trying not to disturb the area too much we decided to rather go back in the afternoon. As we approached the area on an afternoon safari, we saw that she had eaten a little bit more of the kill, but no sign of her at all. We left the area again, and came back later that evening, finding her in a tree close by while hyenas were feeding on the impala that she caught. The dominant female hyena did not want to share her winnings and kept chasing all the other hyenas, dragging it further away from them. The leopard kept a close eye on them, looking for a gap to come down from the tree while they weren’t looking. We left as the hyenas finished off the impala, and the female leopard disappeared into the night.

A large herd of buffalo were drinking at a waterhole and their interactions caught our attention as the young calves were trying to push forward to get a drink as well. The buffalo is one of the species that make up the “Big 5”, the others being leopard, lion, elephant and rhino. The term “Big 5” was originally a hunting term referring to the five most dangerous animals to hunt on foot, but in recent times has become synonymous with wildlife viewing.

A group of Dwarf mongoose sunbathed in the late afternoon sun. Being very curious, they came in and out of the termite mound investigating what is happening outside their home.

Dwarf mongooses are territorial and will use some termite mounds more than once for their homes. They will use the same den for a few nights before moving to another den. They are highly social animals and will stay, forage, and cooperate closely to one another. There is a hierarchy between them where there is a dominant male and female, but everyone will work together to keep the group safe.

A large breeding herd of elephants approached a waterhole with speed and excitement. We were treated to quite the sundown show as they came and enjoyed the refreshing stop just before sunset.

During the dry season, it is common to see large herds of family groups moving together frequently gathering around watering holes. These encounters really are special and often leave guests and guides alike speechless.

A group of six ostrich females made their way into a nice open area. We watched as they were feeding on seeds and insects around a pile of elephant dung. Ostriches are omnivores, meaning they feed on both plant material and insects but will favour plants.

We found this bull elephant close to Selati Camp. He was extremely relaxed to allow a close-up sighting of him.

In most cases elephants pass by our safari vehicles without any interest, just going on with their own business. This bull elephant came to feed very close to us and we had an opportunity to look closely at his tusks and the texture of his skin – this is what inspired this beautiful photo.

Saddle-billed Storks, like many storks, will use urine for evaporative cooling on hot days. The legs are thermal windows through which heat is easily gained or lost. 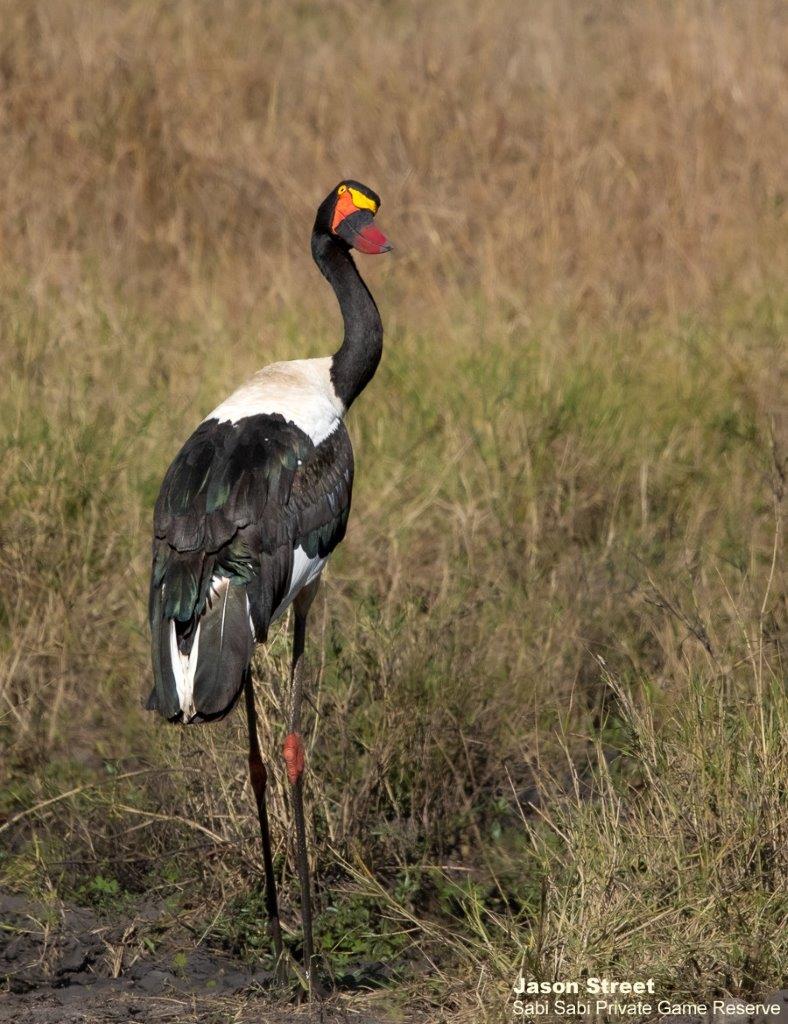