In leopard society, it is always the leopardess that takes care of the cubs without the help of the male leopards or assumed fathers. She has to protect and fend for the cub/s on a daily basis, until the cub/s become independent, usually around two to two and half years depending on the cub. 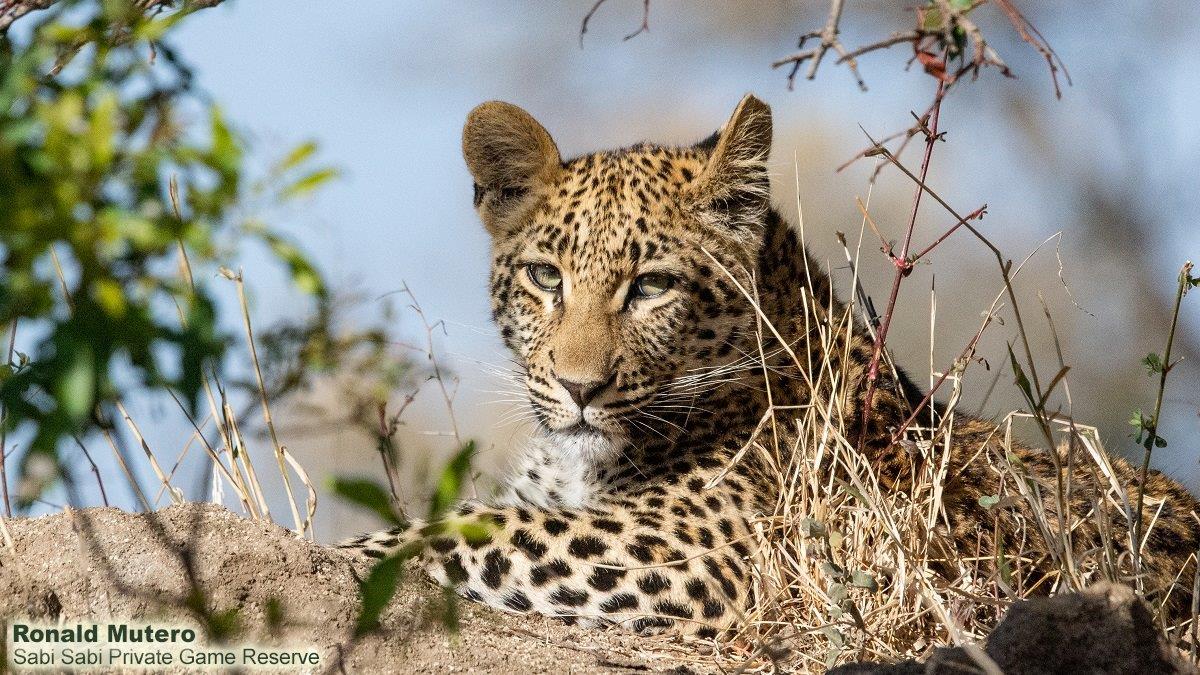 I have followed up on the Ntsumi female leopard since she was born and started her own solitary life like any other leopard. She has had two different litters, but all the cubs in those separate litters did not make it to adulthood. When leopards give birth, the cubs consume only on the mother’s milk for the first three months and typically get weaned around three months of age, making it difficult for the cubs to be seen as the mother hides them very well. From this stage the mother will start taking the cubs to her kills and still take care of the cubs until they can hunt for themselves.

Ntsumi has one surviving cub at the moment, and I have followed her and this cub for a while now and have discovered a lot of changes in the period we started seeing her, until now. 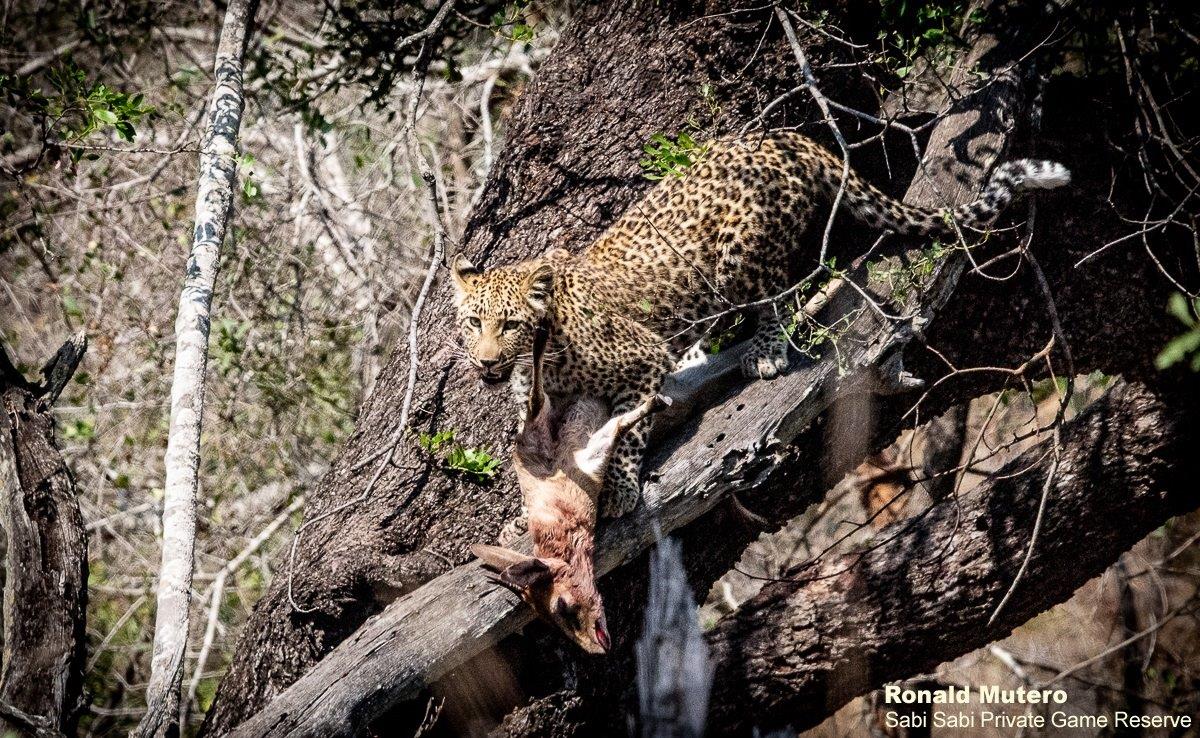 Most importantly was a few weeks ago when I found her hunting and she made a duiker kill. She successfully hoisted the kill and she disappeared into the thick bushes. We decided to wait and we waited for hours before her return and she eventually appeared with her cub. 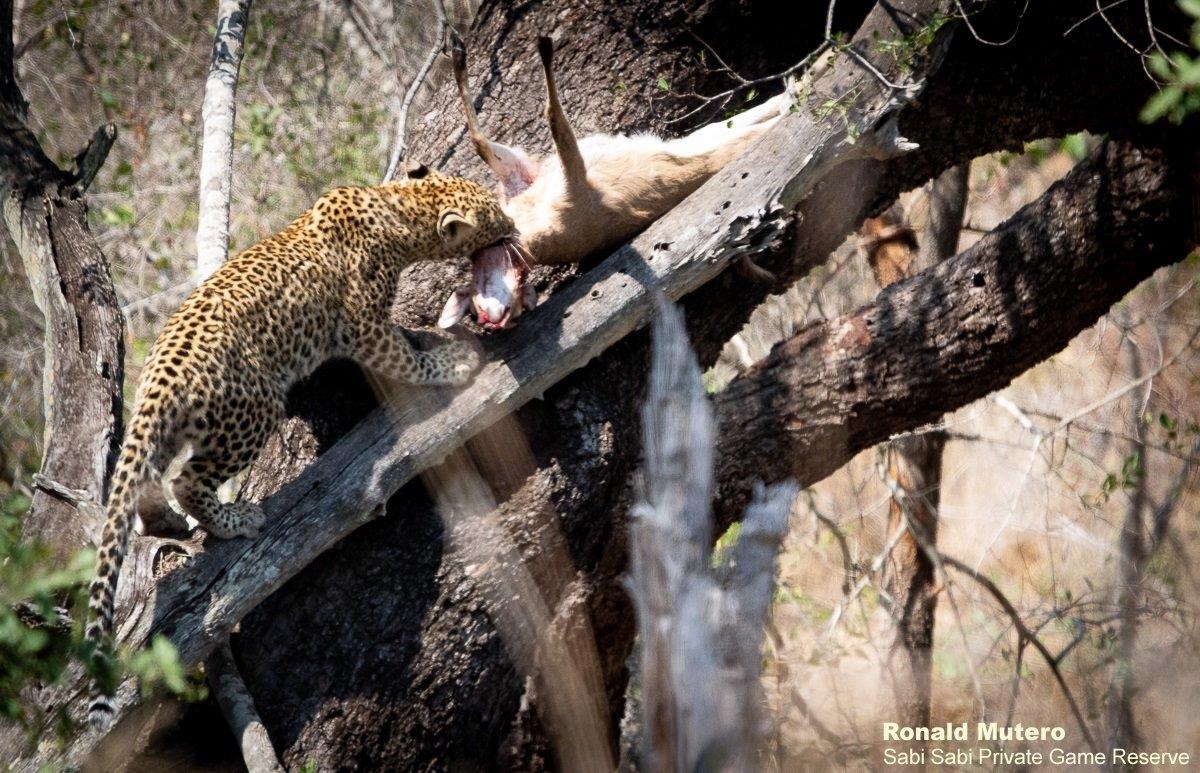 To our surprise, she only showed the cub the carcass on top of the tree, and she went to lie down. The duiker kill was not opened, and the cub was struggling to open it. The mother had placed the kill in a very difficult place. 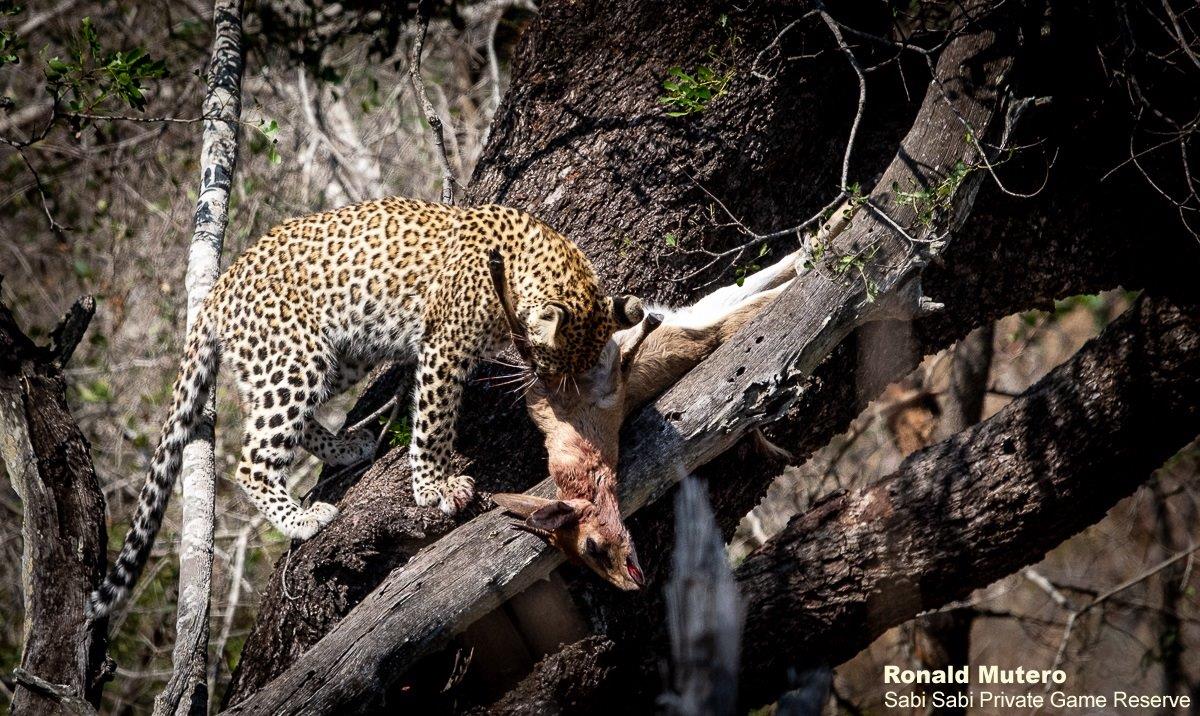 The cub kept on coming down the tree and try to have the mother climb up and open the kill for her to feed but it didn’t happen. We realised that the mother was about to teach the cub some valuable lessons. 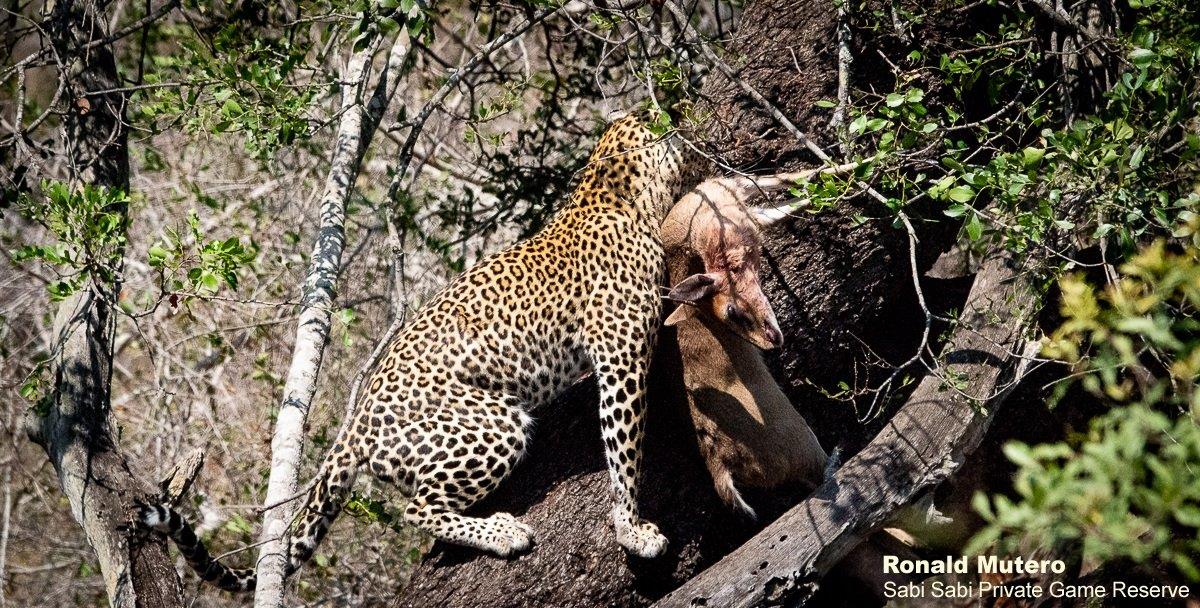 The cub tried to reposition the kill and the kill fell to the ground.  Fortunately there were no hyenas present otherwise it could have been another story. However, the mother ignored the whole situation and the cub tried to take the kill up the tree by herself. The duiker looked to be the same body weight as the cub or even heavier, but she managed to take it up half the way and hoisted it securely. 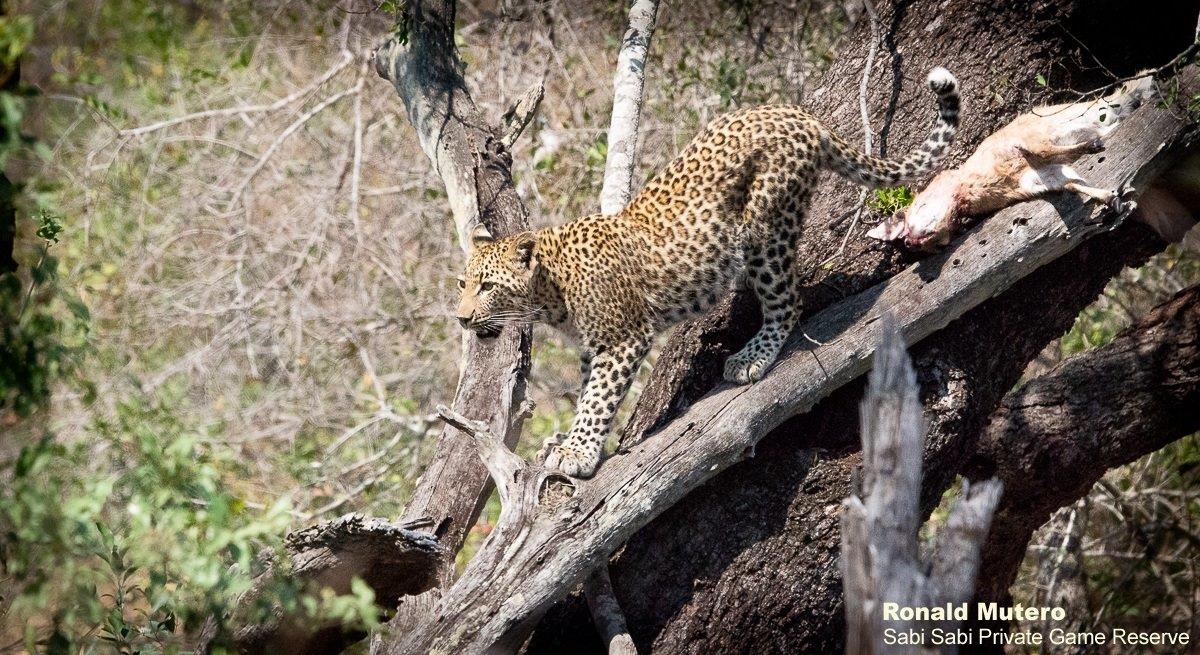 The cub kept on going back and forth to the mother in anticipation that the mother will come up and open the kill for her, but she did not. It went on for a long time and eventually the mother went up the tree and took the kill further up the tree, without opening it. 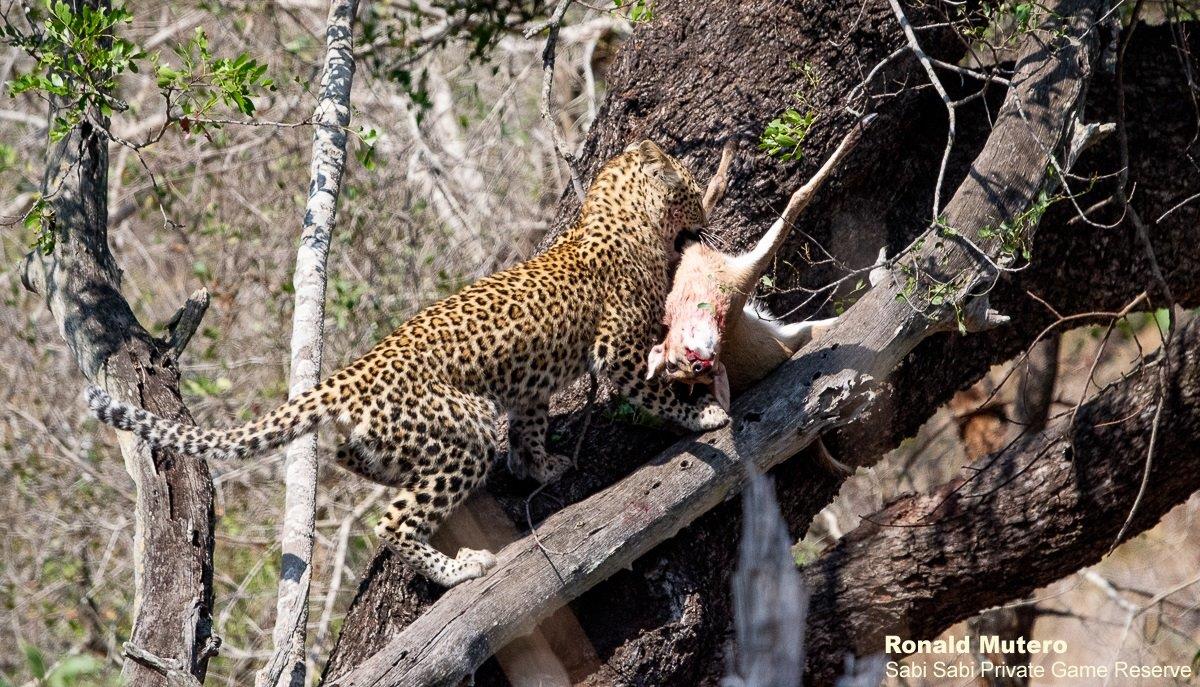 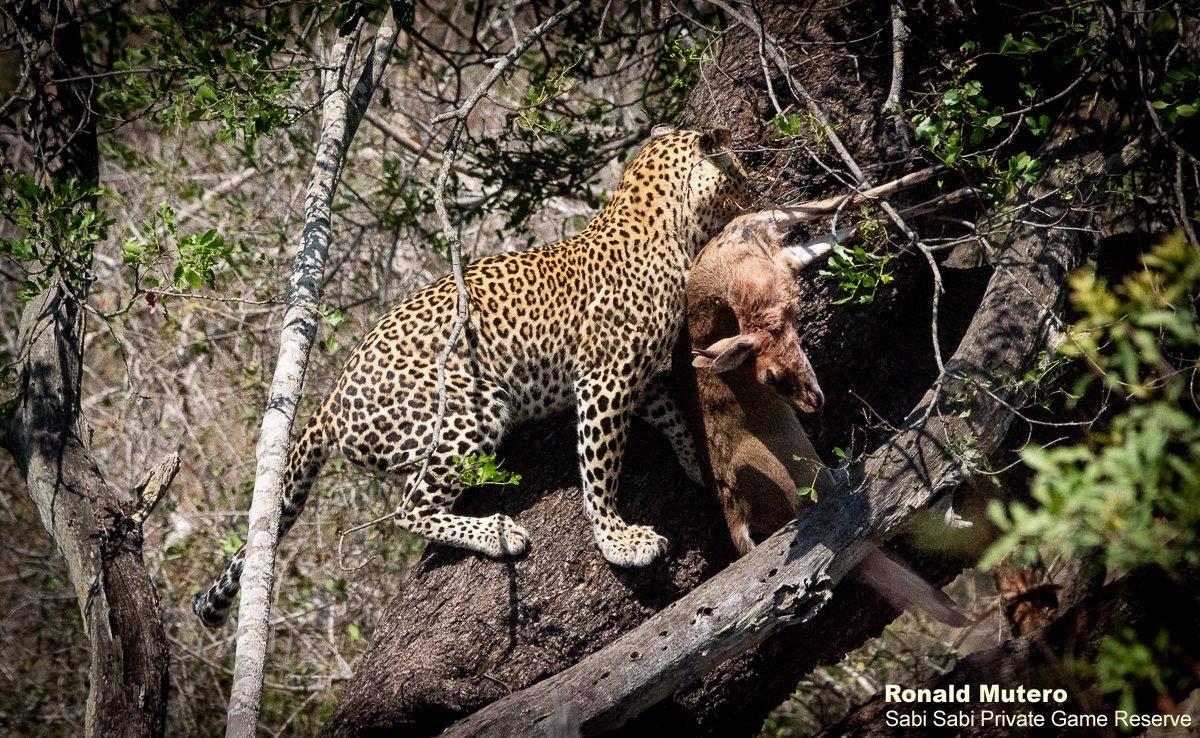 It was very entertaining to watch but as well interesting to see how a mother leopard would spend a lot of time in trying to teach her cub skills that she will need in her life once she becomes independent and solitary. Often, we read about these facts but never witness them, but this was my first time to witness this – a mother trying her best to equip her cub with vital lessons she will have to learn to survive! 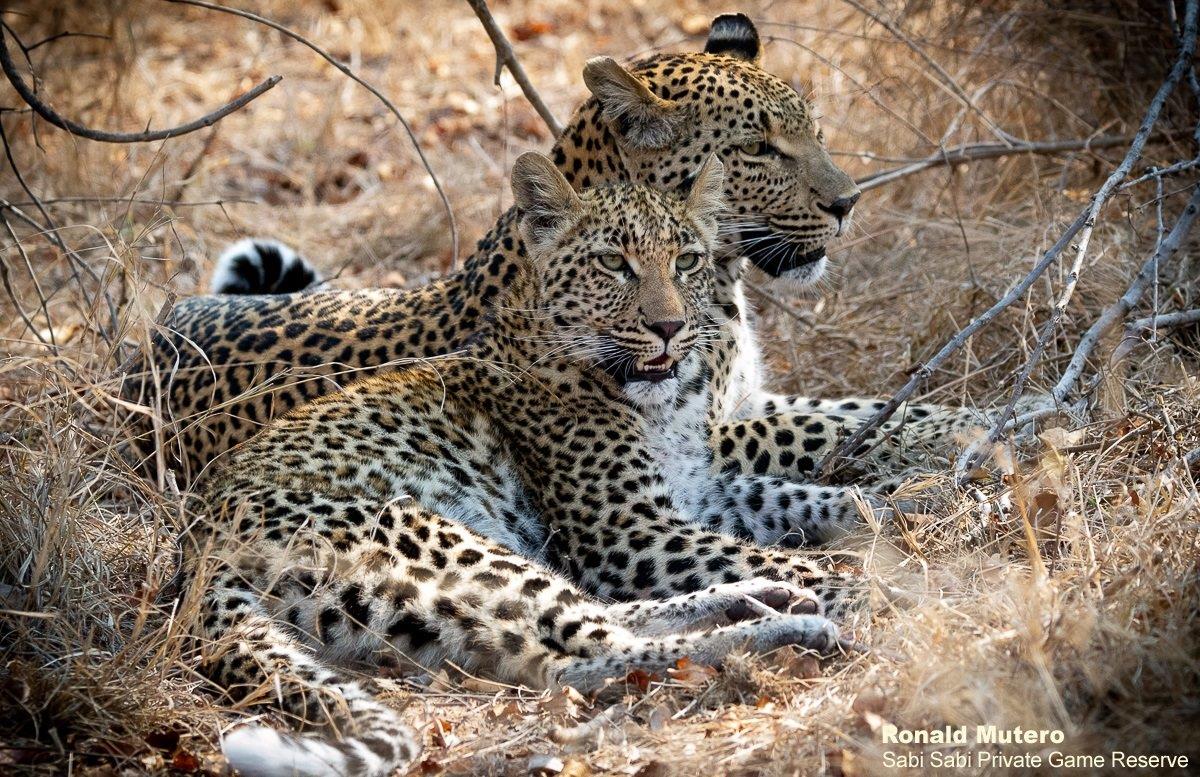