What is a wild dog? Some guests that arrive at Sabi Sabi sometimes ask this question and it is a fair question. As most of what you see on social media platforms is generally about the Big 5 (lions, elephants, rhino, buffalo and leopards), naturally, wild dogs, also known as Cape Hunting Dogs or Painted Wolves are often overlooked because they may have simply not been heard of before.

As a guide, one always wants to teach and inform your guests about the wildlife but the best for me is when we are lucky enough to encounter wild dogs… AND show my guests something out of the ordinary, something they do not know of or have not even heard about. It is very common to see their reaction, and the quizzical look of “What is this animal?” When you start explaining what wild dogs are and how rare it is to see them, you draw the guest’s attention immediately.

So, to draw your attention to wild dogs, I am firstly going to give you some basic information about them. 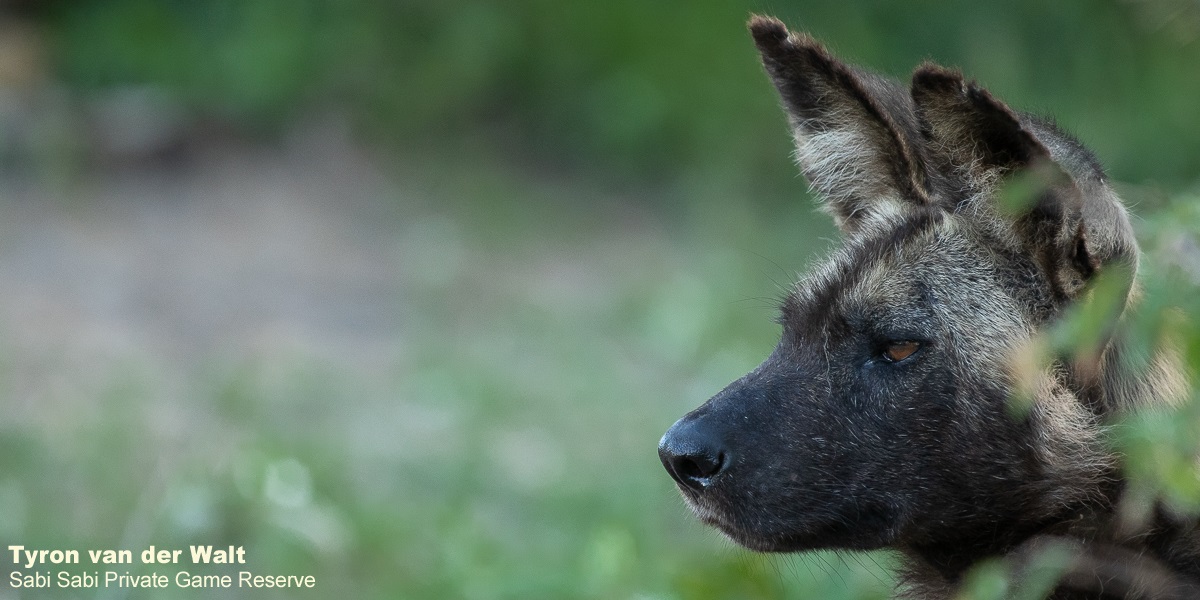 What is a Wild Dog?

It is a canine native to Sub-Saharan Africa and is the largest indigenous canine in Africa. They are highly sociable animals that live in packs varying up to 40 individuals. They vary in size but there is an average of 60cm – 75cm at the shoulder height and an average weight of ± 20-35kgs. Within each pack, there is an Alpha pair of dogs, being one male and one female. They are the ones who breed while the rest of the pack then provides food and security to the Alpha pairs’ offspring. With the pack dynamics, the males will more than often stay within the group, but the females will leave in search of another pack, (on the rare occasion some males will also leave for the same reason). Wild Dogs are primarily diurnal, but often exhibiting crepuscular hunting behaviour meaning they hunt early mornings and late afternoons (but with any predator this is not always the case and hunts may happen at any time). They are extremely successful hunters. Camouflage plays a minor role in their hunting strategy, unlike a leopard or lion who rely heavily on their camouflage and their tactic is one of surprise rather than long distance chases. Adult dogs rely on this endurance running to chase down their prey, which means that prey species – from something as small as a hare, all the way up to wildebeest – are often run to the point of exhaustion and chases can carry on for kilometres but will stop if the chance of success is slim. When they are chasing down prey it has been recorded that they can maintain a speed of ±56km/h (35mph) for several kilometres, all this through thick bush and undulating ground which is incredible!

I want to share with you three of my best wild dog sightings that I have had here at Sabi Sabi.

It was a very short wild dog sighting that my guests and I had one day. We had come across a small pack of wild dogs on the move. Suddenly they bolted and caught what looked like a small steenbok. It was not long after, when all the squealing and commotion had subsided, when a hyena pitched up to see what the fuss was all about. As usual, the wild dogs harassed the hyena but not long after, another hyena appeared and now became a standoff between the two hyenas, who were larger, and two wild dogs. Both watching each other intently to see who would back down, but neither did. After a few minutes of staring at each other and a low growl being uttered from both sides, the hyenas decided to move a fair distance away, leaving the wild dogs alone. 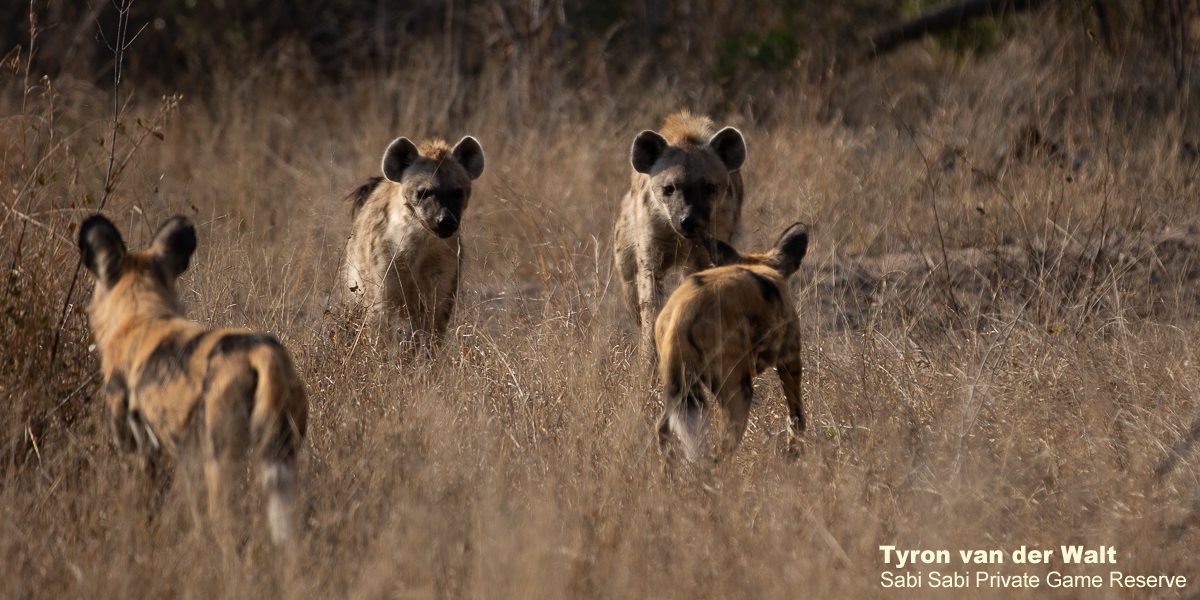 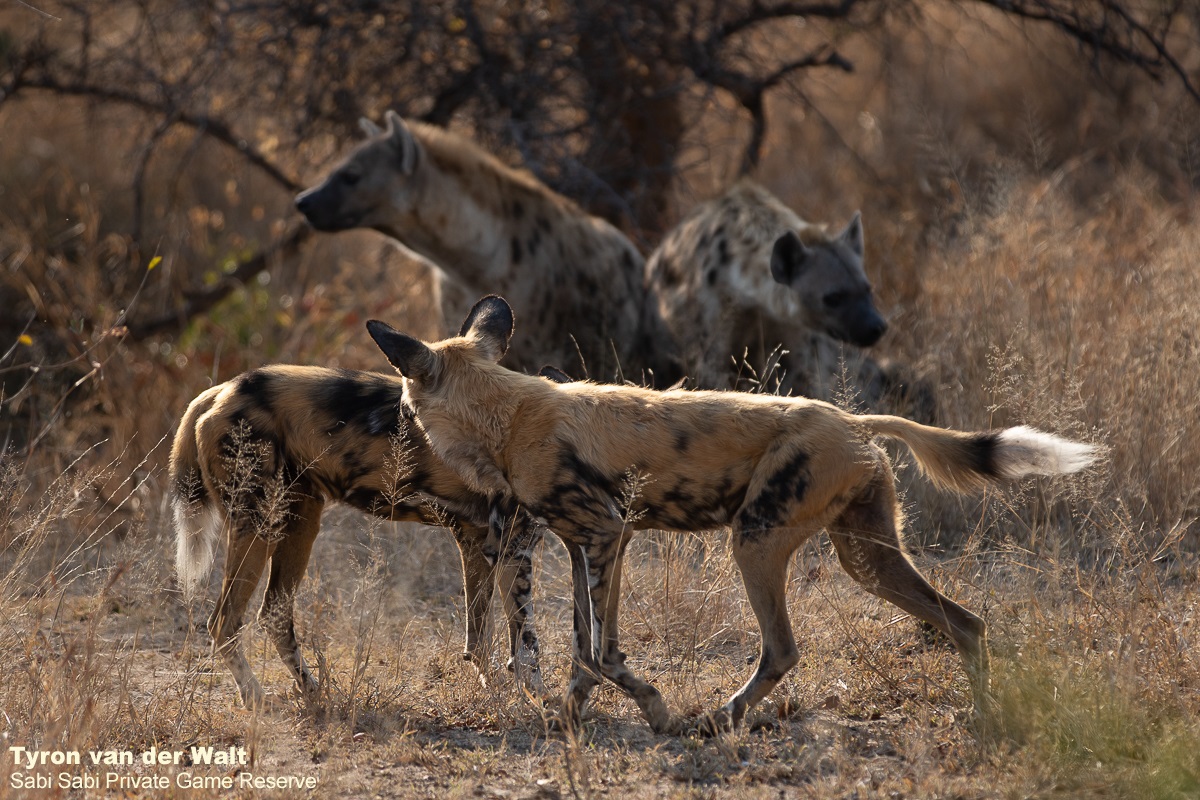 “Dog in the Grass”

It was early one morning that we spotted a group of wild dogs that had just brought down a young impala, not far from Selati Camp. As we watched them eating, there was always one or two heads that would be up at any one time, on the lookout for any scavengers or predators that could chase them off their kill. The adult that I captured in the picture, had arrived sometime after the others, briefly posing, and looking in my direction allowing me to take a great shot before it joined the feast. This gave me one of my best wild dog pictures I have taken. 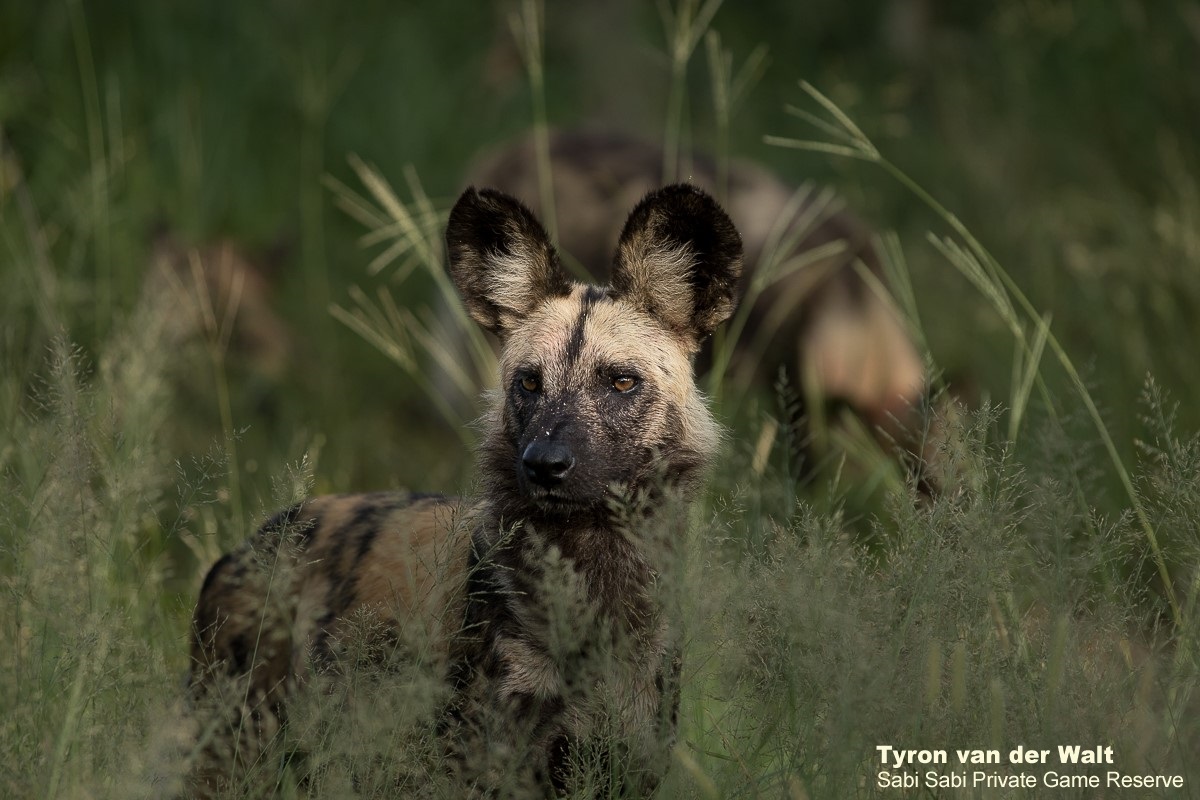 Puppies! What else is there to say? They have big eyes, ears way too big for their head size and long slender legs that look like little poles holding up a body. I mean what could be cuter!? 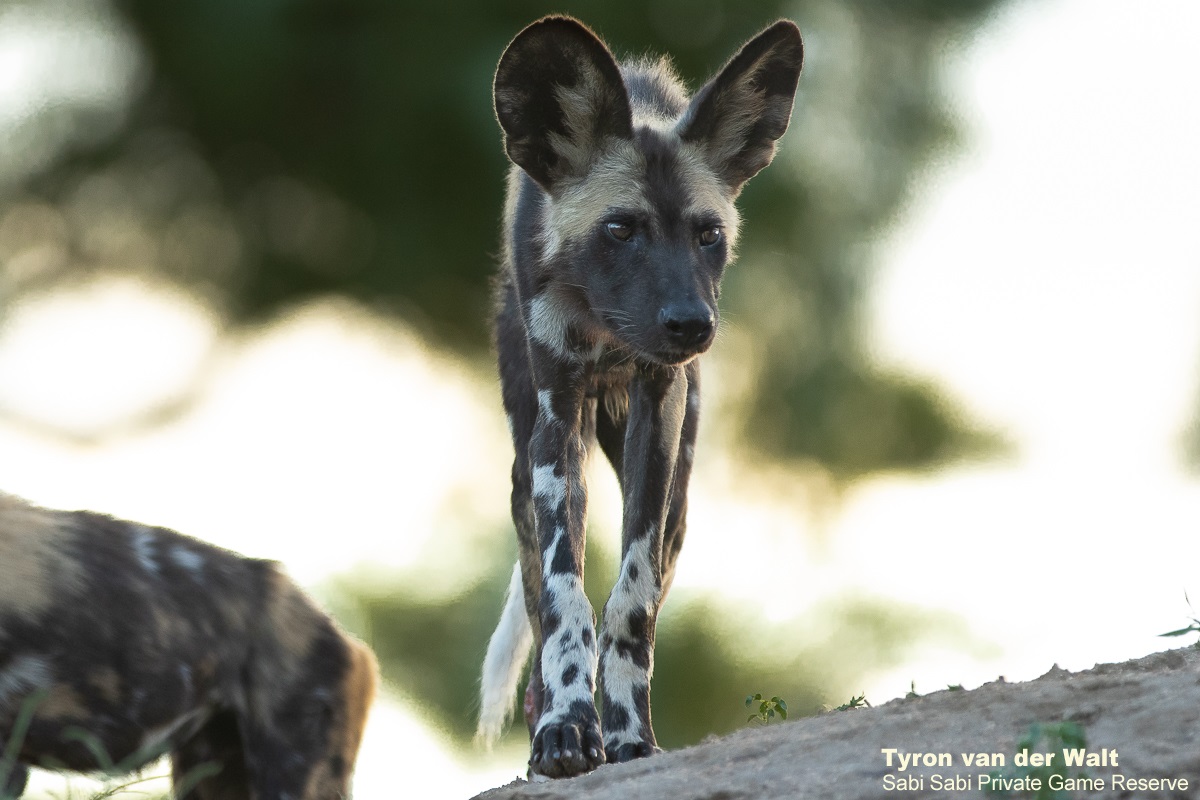 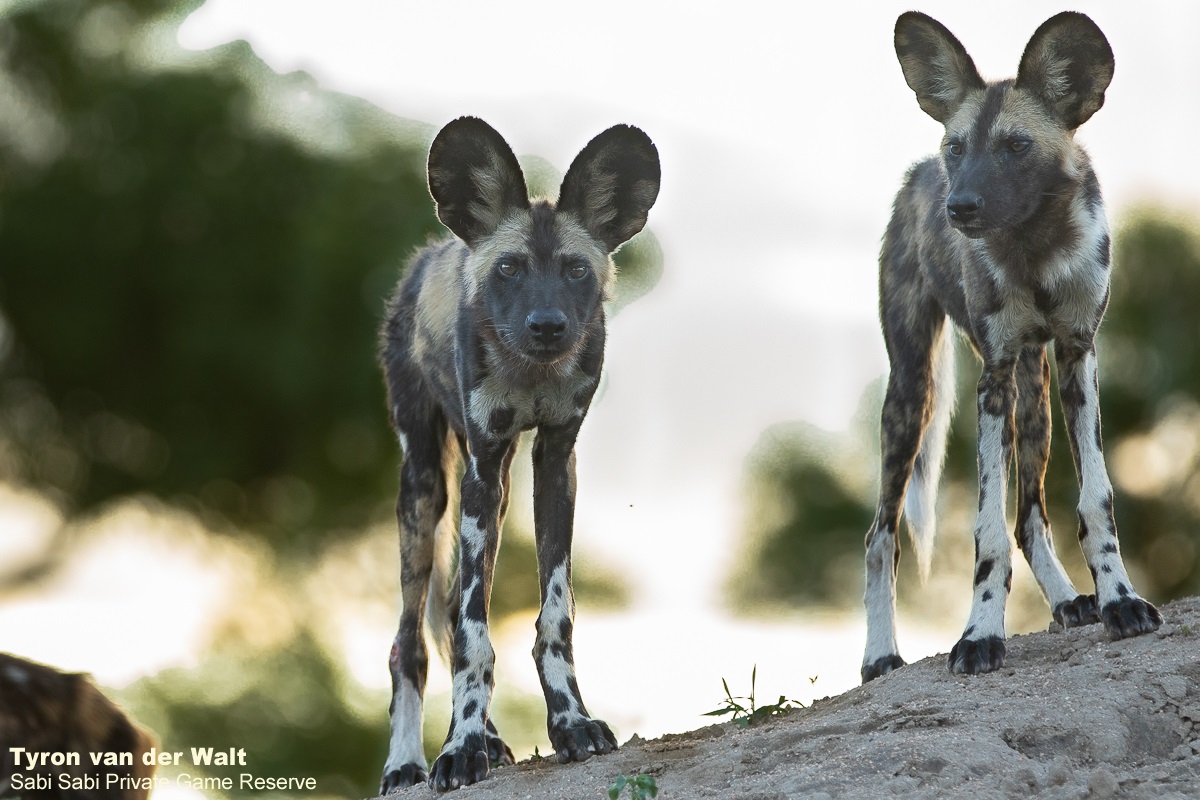 We came across quite a big pack of wild dogs resting in the fading light of the day as the temperatures dropped. One dog got up and then the next and so the chain reaction began, and they were all on the move with the little pups all congregated at the back, playing and chasing and biting one another as little ones do. The pups briefly moved toward the vehicle, inquisitively sniffing the car. One pup looked up at me giving me a great photo opportunity before the adults called and they all moved on. 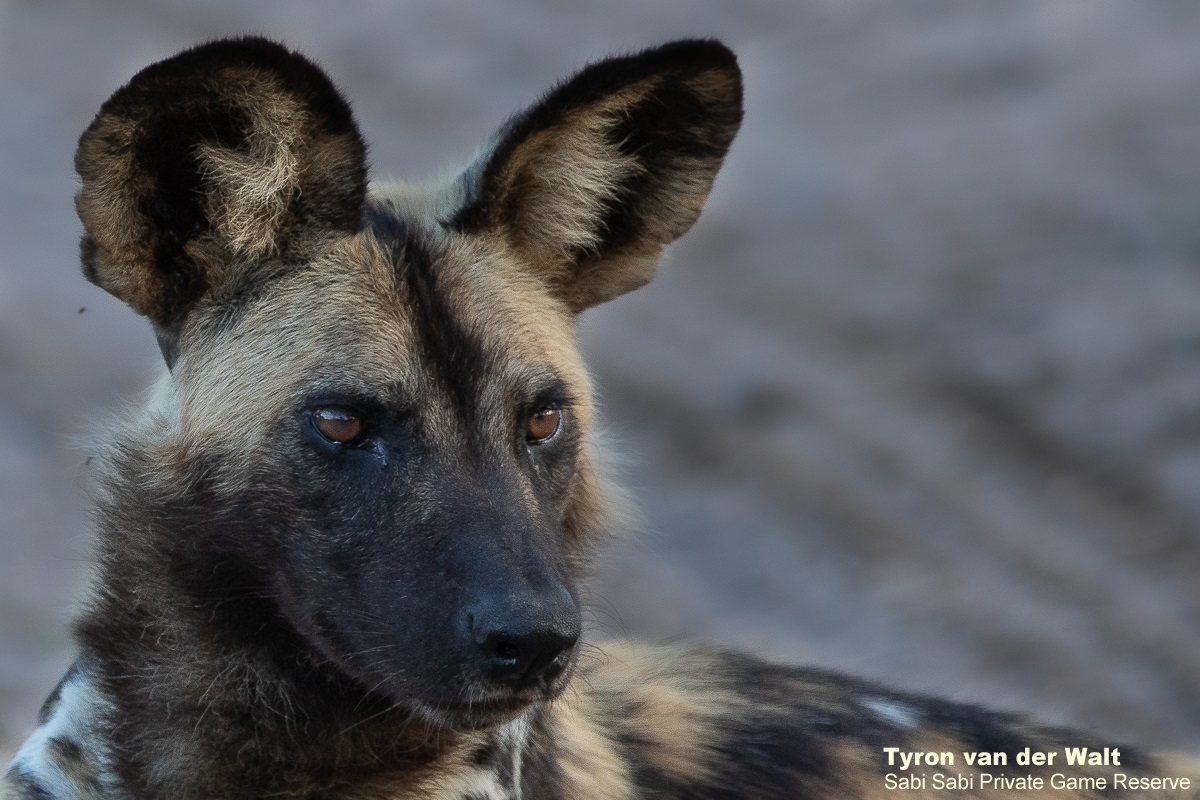 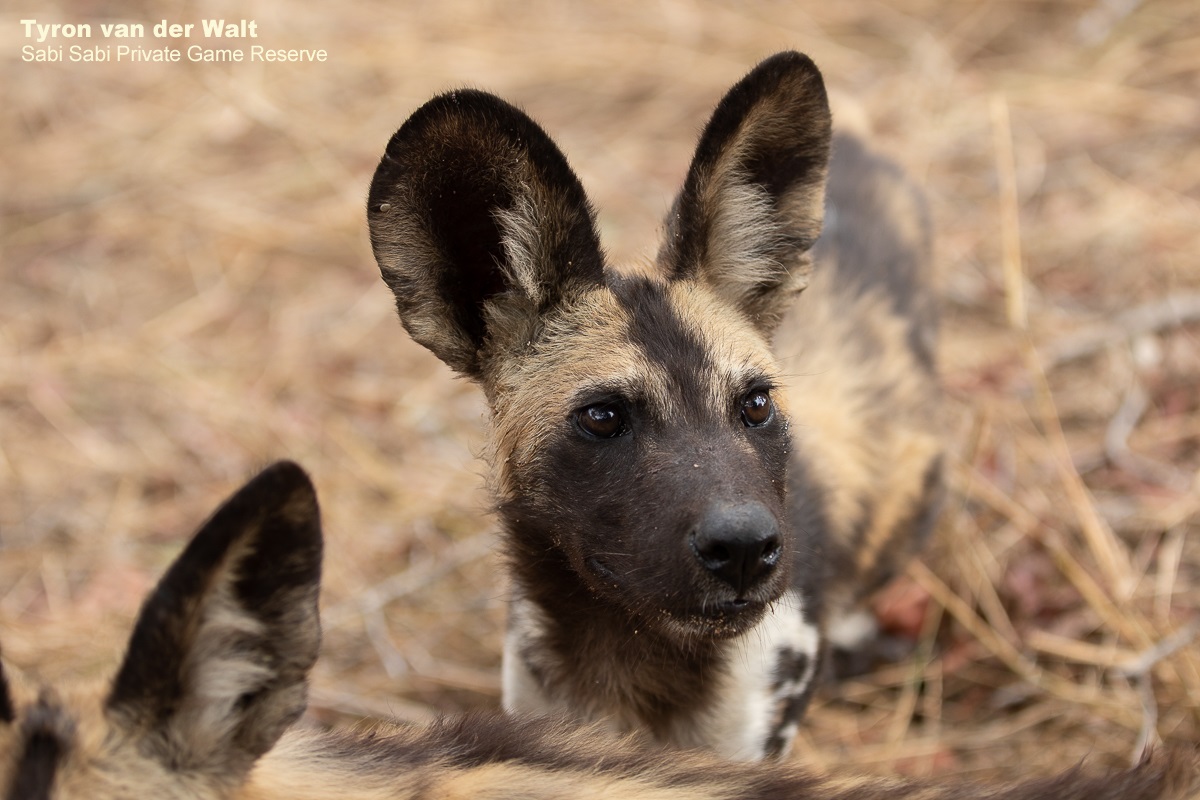 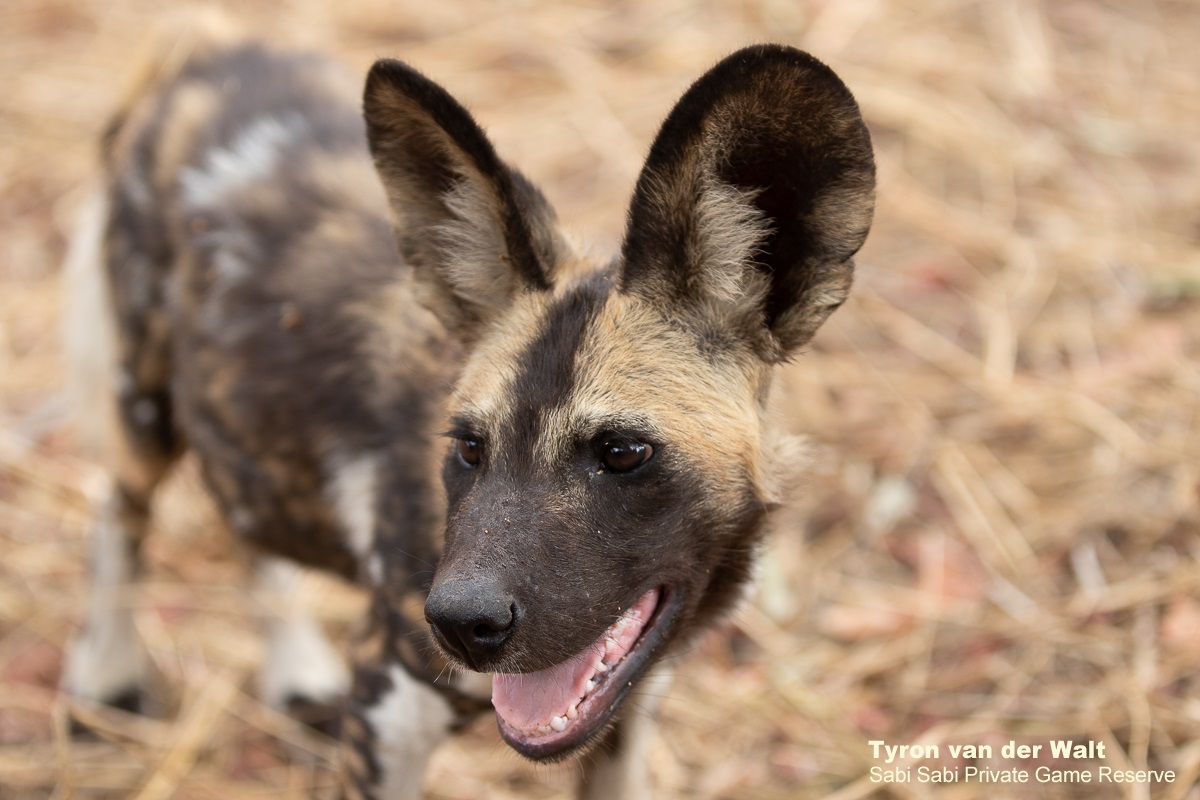 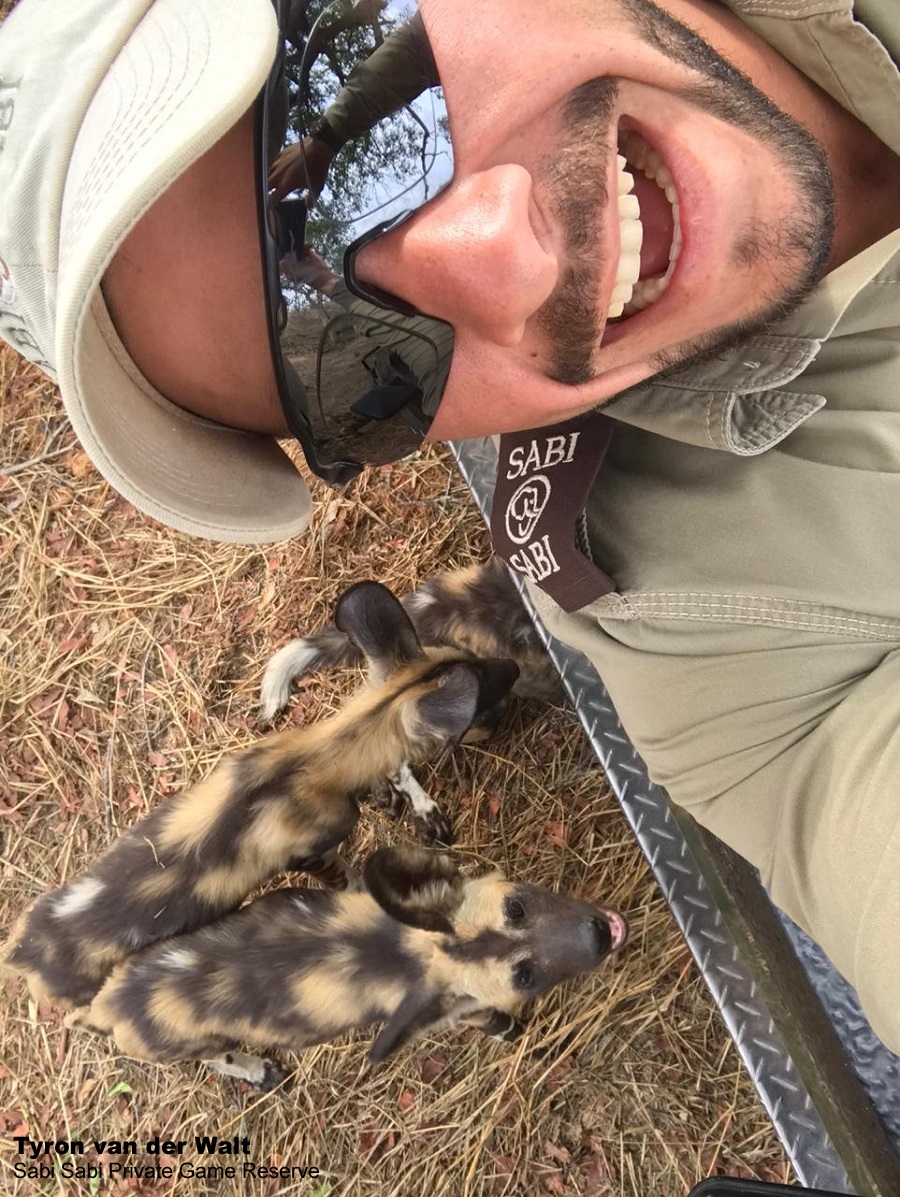